The first teacher employee at the School was Miss Ellen Hartnett. Laywomen taught in the school until December 1892 when the Sisters of Mercy arrived from Bendigo, Victoria. In its early days, both primary and secondary education was provided at the school as well music being taught privately by the Sisters. The Sisters of Mercy continued to staff the School until 1971 when the first lay teacher was again employed to teach Prep in the Church Hall. The Sisters relinquished management of the School in 1992 after 100 years. The first lay school leader in 100 years, Mr Philip Robinson, was appointed in 1993.

In 1939, a new School was built using voluntary labour. Extensions to the School were completed in 1979 including the addition of two classrooms, open area, toilets, and an administration area. Included in this extension was new equipment. A parish-funded hall was also completed at this time. In 1992 and 1994, three classrooms for early childhood classes were built and the library facilities improved.

The Kindergarten and child care centre began operations in 2003 with a dedicated Kindergarten facility opened in 2005. In 2006 a double terrapin was constructed to accommodate Year 2 and the Year 5/6 class.

During 2009 the School Hall was revamped to better cater for school activities and to effectively house the Shamrock’s outside school hours care program operated by the child care centre. This redevelopment made the hall a much more inviting and user-friendly shared space and was renovated as part of stage one of the building program being implemented as part of the federally funded Building Education Revolution (BER). 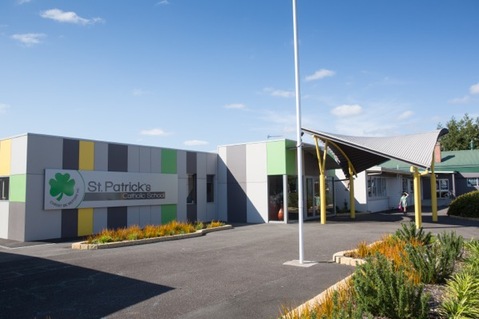 Access to the School was improved internally in 2010 with new entrances created. A reception area and new frontage to the School also improved access and street appeal. Further building work included updating the Year 3 and 4/5 classrooms, building a new kitchen/canteen area, a larger staffroom, two new office facilities for staff, and the creation of a new kindergarten playground. This building work was part of the BER funded program. This work enhanced facilities for students and staff, and made St Patrick’s a modern and enjoyable learning space for the School community. The BER building projects were officially opened in 2011.

Detailed planning was undertaken by the Tasmanian Catholic Education Commission Capital Projects Committee in 2012 to determine master works requirements. This Committee—together with the School Board, Mr Andrew Goelst, and architect Mr Jonathan Buist—set about establishing a master plan for future building works.

Funding was granted for the removal of the Year 5 and 6 terrapin and for two new general learning areas to be built during 2013 when the internal student toilets were also refurbished and two classrooms revamped. The Year 5 and 6 classes moved into their new classrooms to begin Term 4, and work on the refurbishment of the Year 1 and Prep classrooms took place in the holiday break between Terms 2 and 3.

This final injection of funds from capital projects funding completed most works required at St Patrick’s for the immediate future. A proposal for a break-out space/small general learning area is, however, being discussed.

2021 Class Stationery Packs
Included with today’s Newsletter is a cover letter and the class stationery pack list for your child’s 2021 class.